skip to main | skip to sidebar

I had originally wanted Mary to be a lamb for Halloween. However, I wasn't interested in buying or making a costume, and I was unable to find one to borrow, so we had decided on the classic costume for babies: the pumpkin. Someone lent me an adorable handmade costume,and we were all set to use it, until this. We stumbled upon a really sweet bonnet while in Mark Twain's hometown of Hannibal, MO. And thus, the scramble for an ensemble began. Charlie was Tom Sawyer, Sam was Huck Finn (of course) and Mary? Well Mary was Becky Thatcher~ 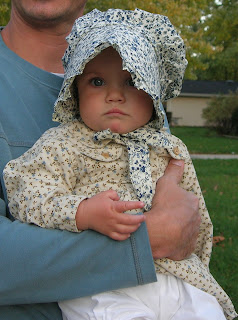 We bought the bonnet, and found the dress, and all I had to make were the bloomers. Not too bad! 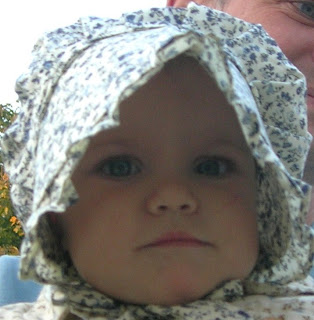 Mary liked Trick or Treating, and Scott gave her a tiny bit of chocolate.
Tomorrow is Mary's birthday!
Posted by Gabi at 11:58 PM

Newer Post Older Post Home
Subscribe to: Post Comments (Atom)
Mary Ruth was born November 1, 2007. She was diagnosed with Tetralogy of Fallot in utero. Mary had her first heart surgery at 6 days old. She had her complete repair surgery April 11, 2008.

"Create in me a clean heart, O God, And renew a steadfast spirit within me." Psalm 51:10

Please visit Mary's CarePage for updates the day of surgery and during her recovery.

Gabi
The mother's heart is the child's schoolroom. - H.W. Beecher

What We're Reading to Mary

What Mary Listens To